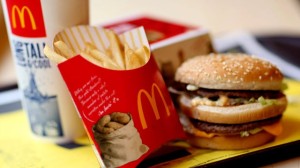 40 days without a large Big Mac, 20 McNuggets & a McFlurry is going to be hard. Very hard.

For the last week at work, everyone has been asking; what are you giving up for Lent? And truth be told I hadn’t really even thought about it.

Today, it got to the point where my colleagues had to designate my sacrifice for me considering Lent starts tomorrow.

And at the time of writing this I hate each and every one of them! (You know who you are!)

They could have given me chocolate to give up, but oh no. That’s apparently too easy.

They could have given me Facebook, but let’s be honest; that was never going to happen.

No McDonald’s for 40 days and 40 nights. No KFC. No Indian, no Chinese. No stopping off at Dominoes on the way home from football or work.

I suppose, I can see where they’re coming from. It’s mainly because of takeaway food that I’m such a #BrokeAssBitch, as we like to declare at work. They think they’re gonna help me save money, and I would agree with their logic, except for the fact they didn’t ban me from chocolate.

I guess their second ulterior motive is to finally get me learning to cook. If you know me well, you’ll know I can’t cook to save my life. To cut a long story short; I moved out three years ago and still go to my parents’ for dinner seven nights a week to avoid burning my flat down. You get the gist.

I’ll just replace my McDonald’s with a Terry’s Chocolate Orange and a few Walnut Whips here and there, it’s quicker and easier than that cooking malarkey.

It’s also interesting that in the news at the minute is the story of a McDonald’s Happy Meal reportedly being exactly the same after being untouched for six years. SIX YEARS!

This gives me hope. If I go and buy it all now, at least it will still be edible! What’s 40 days untouched?

Did you enjoy this post? Please leave me a comment using the form below to tell me what you did (and didn’t) like about this post and I’ll be sure to get back to you. Just above the comments box are five little grey stars and I’d really appreciate if you turned some of them yellow (preferably all five!) and used it to rate this blog as a quick visual way to let me know which of my posts you are enjoying more than others.

You can also follow me on Twitter @RNTomlinson and if you have any suggestions for future posts feel free to leave them down below, or tweet them to me too.

Part-time blogger. Full-time entertainer. Can be found on RNTomlinson.com & ccfctv.co.uk.
View all posts by RNTomlinson »
« Prisoner to my own mind.
Every scar, no matter how big or small, new or old, has a story. #SemicolonProject416 »

This site uses Akismet to reduce spam. Learn how your comment data is processed.